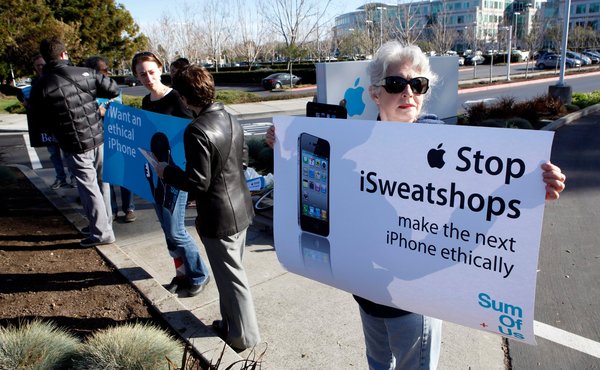 Workers rights have again been exploited by a Multinational Corporation, but this time, it’s Apple. Apple say they have done more than any other company to prevent the exploitation of migrant workers rights.

The entire business model promotes innovation and perfection. But these reports suggest it’s just ‘business as usual’ for a multinational corporation. Exploitation comes as standard. Or so it would seem.

According to the BBC documentary, workers in the Pegatron factories making the iPhone 6 were experiencing multiple human rights violations. They regularly work overtime, have to attend unpaid pre and post work meetings,  sleep in dormatories with 12 co-workers and child labour is still prominent. In the documentary footage several workers are seen falling asleep at their work stations. It also shows a workers exam where the results are being chanted out over the loud speaker, ensuring workers fill in the correct responses.

Pegatron stated “we are carefully investigating the BBC’s claims and will take all necessary actions”.

Apple responded to the documentary saying they will investigate workers sleeping on duty, but said “napping on breaks is not unusual”.

But that’s not all. Panorama went on to discover that Apple may be using tin from illegal mines in its production, when the team went to Bangka in Indonesia.

We agree that this issue can’t have a simple solution, but surely more can be done than this?

The BBC Report quotes a statement from Apple on the topic:

“The simplest course of action would be for Apple to unilaterally refuse any tin from Indonesian mines. That would be easy for us to do and would certainly shield us from criticism. But that would also be the lazy and cowardly path, since it would do nothing to improve the situation. We have chosen to stay engaged and attempt to drive changes on the ground.”

Apple released their 2014 Supplier Responsibility Progress Report in which some of the highlights included are:

Apple has said they are continuously working with suppliers to prevent excessive overtime, and feel they are doing more than any other company to ensure fair and safe working conditions. This may well be true, but if that is the case, surely something has to be done.

If our most innovative and successful global technology company can’t pave the way for a fairer future, what hope do we have?

A short BBC video is available to watch below. The report can be accessed by clicking here.

The documentary was screened last night on BBC, but you can watch it again on the BBC iPlayer now.