Here’s What iOS10 is Bringing To Your iPhone

On June 13th 2016, Apple announced the release of the latest iOS software for your iPhone, iPad, and iPod. The beta version is already available, and the full version should be released in September.

Technically speaking, iOS is out right now. If you’re keen on trying it out, you can find out how here: https://beta.apple.com/sp/betaprogram/

That being said, you should probably wait. The Beta versions are released to the public so that people can tell Apple if there are bugs in the system, and Apple can figure those things out. You might as well let the people deal with all the problems

The three to four month gap between the announcement and release of the iOs also gives third-party app developers time to optimize and test their apps with the new iOS.

It can be annoying to have to relearn programs that you’ve already gotten quite used to, but there is a lot to be excited about in this update – and we’re going to make sure you’re prepared!

This update is supposed to fix many of the biggest problems with Apple’s current software and add some pretty cool features. Let’s see what the future has in store.

The new iOS completely changes the capabilities of your lock screen. Many functions that you would normally have to unlock your phone for, can now done directly from the lock screen.

Notifications are now organized into bubbles. Every bubble has is 3D Touch enabled – you can now ‘hard press’ a calendar notification to accept or decline and invitations.

The significance of this capability is best demonstrated with iMessage notifications. I’ve long wanted to be able to quickly respond to messages right in the lock screen where I get the notification, and now you can!

You won’t have to go searching through different apps to do something as simple as answering a message. Convenience!

The swipe up Control Center has been getting a little crowded lately. Users complained that with the added (extremely popular) Night Shift function made the buttons a little too small.

In iOS 10 Apple has decluttered the Control Center, giving it more functionality and a cleaner look.

Shift gets a nice big button above the shortcuts, and AirPlay and AirDrop Get bigger buttons above the Night Shift icon. 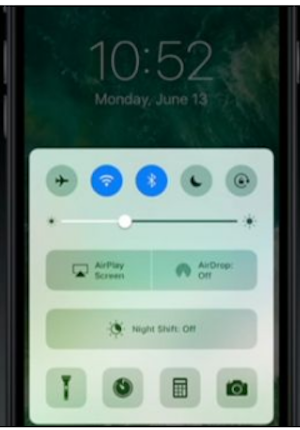 But what about the music function? All you have to do is swipe right in the Control Center and you’ll arrive at a dedicated pane for music. It features the album art as well as the normal skip, pause, play functions 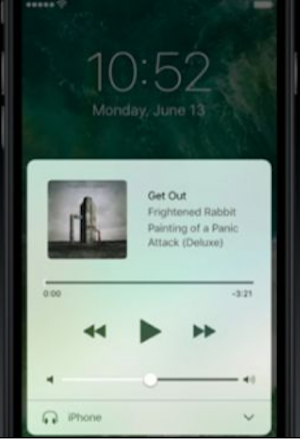 Using your camera from the lock screen is also made much easier: simply swipe right, and the camera opens up. This is much easier than swiping the tiny little icon that was available in iOS 9.

iOS 10 also brings the seemingly simple, but long-lacking ability to clear all notifications with one gesture.

There is a neat little ‘x’ button in the top right hand corner. When pressed, all your notifications will disappear with pleasing efficiency.

Note that 3D touch (the ability for your iPhone to sense how hard you press the screen) is only available on iPhone 6s or higher.

What happens when you swipe left in your lock screen? Widgets. Widgets happen.

Apple has a whole list of widgets available in iOS ten. For example, you could select the Weather widget, your Favourite contacts, and the Calendar widget. 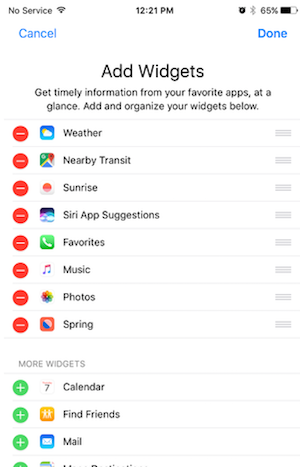 Now when you swipe left, you have an easy view of all the widgets you’ve selected. It’s another way iOS 10 has revolutionized the lock screen; get the information you need without ever opening up an app.

If you have an iPhone you probably use iMessage pretty much every day. Apple spent a great deal of time updating iMessage in it’s latest iOS, and you’ll notice!

To start, emojis (those fun little icons) are bigger and better and iOS 10. The revamped messaging app will also be able to sense when a word can be easily replaced with an emoji. But that’s just a start!

You can now write your own messages with a finger – giving it a little personal touch. Web links are displayed in ‘rich’ format. Saying something like ‘Happy Birthday’ will result in an animation that takes over the entire screen. 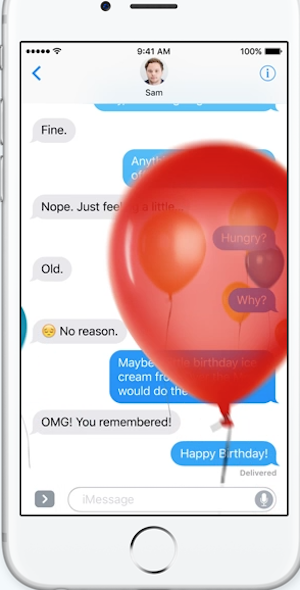 You can also choose to have your iMessage appear only when clicked on using ‘Invisible Ink’. Or if you’re sending a message that shouldn’t be ignored, choose a full screen animation like fireworks!

Unfortunately, your friends that don’t have iMessage (perhaps they have an Android phone) still won’t be able to experience iMessage in all it’s newfound glory.

Siri gets a major facelift

It seems like every time Apple comes out with a new iOS Siri gets better and better. However, Siri processes 2 billions requests every week. So it makes sense for Apple to perform continual updates!

The first major improvement is the ability to use Siri with third party apps, and talk to Siri as you would a normal person.

For example, you could send a message using a third-party messaging app like Kik by simply saying: “Siri, send a Kik to Sam saying I’m running late, but on my way.” In iOS 9, this would have been a multi-step process.

The whole point here is that Siri would be able to perform the task however you asked it to do so – and in any language.

The ability to control third party apps makes Siri far more useful. You can now order an Uber, book a reservation with OpenTable, pause a workout with MapMyRun, all with just voice commands.

Siri’s new capabilities have also influenced QuickType. In previous versions of iOS QuickType would guess the next word based on the previous one. Now, using what Apple calls ‘deep learning’ QuickType can guess what you’re going to say next based on the context of the entire sentence and prior conversations you’ve held.

Almost sounds… creepy. But, Apple says all this data is stored on your phone and all the processing done locally. You can also easily opt in or out of using QuickType in this fashion.

QuickType is also adding a bunch of cool shortcuts. When someone asks ‘Where are you?”, a single touch of a button will send them your exact location on a map. Similarly, QuickType will remember addresses, restaurants and movies you’ve searched for and allow you to paste them into the conversation without having to ‘Copy’ them to your clipboard.

Apple Maps is much improved

As a frequent traveller and even more frequent user of Apple Maps, I was incredibly pleased to find out that Apple Maps received some attention in this update.

Maps was okay before, but not being able to scroll ahead and see what lies ahead in the route was very frustrating. In iOS 10 they’ve fixed this issue, allowing you to scroll and zoom in and out of the Maps view.

iOS 10’s version of Maps has improved the traffic function to compete with Google Maps, allowing you to see what traffic lies ahead, and offering better routes based on up-to-date traffic info.

As part of the overall redesign in iOS 10, Maps is much simpler, cleaner, and easier to use. Nearly every feature has been improved, including Maps’ ‘Nearby’ function, which allows you to easily see businesses and landmarks near to you.

The last, and possibly coolest feature of Maps, is that if you have a new car with CarPlay, Maps will remember where you parked your car and give you directions back to it. Thank you Apple!

The Phone app gets a little boost

Sometimes, I forget that an iPhone can actually be used to phone people. Apple hasn’t made any significant upgrades to the Phone app in a while, but iOS includes a major step forward.

Voicemail transcription. I’m not the only one who doesn’t like going through and listening to messages!

Now the Phone app will listen to and transcribe a voicemail. It may not be terribly accurate in the beginning, but even so I think it will be useful,

Apple music gets a redesign along with most of the other iOS apps. But, it also gets a few new features. 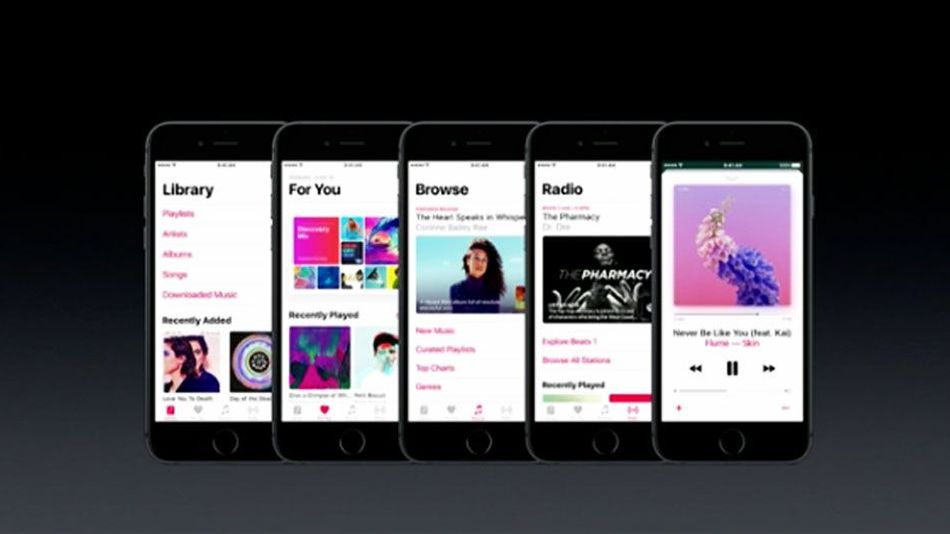 Lyrics to every song on Apple Music are now available with a quick swipe of your thumb. Also, you’ll be able to play music while you take photos. So that’s handy.

You can now take RAW images with your iPhone. While bigger in file size, they offer greater detail for those looking to edit the images professionally.

In Safari, you can now watch videos without having them go fullscreen. You can also have an unlimited amount of tabs open at a time – and close them all at once!

As the bugs in iOS 10 Beta get worked out, new features will be added and improved upon. We’ll be sure to have more posts as this information becomes available.