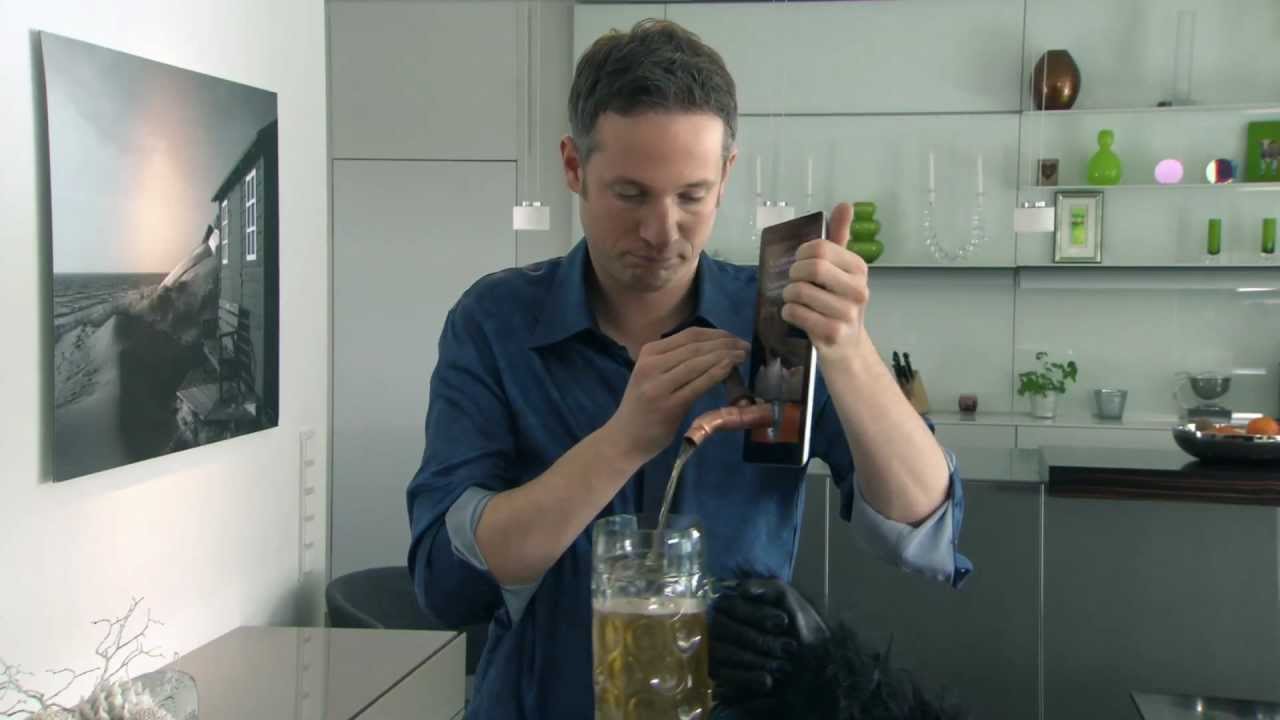 OK, as a keen iPad user, I have been blown away by each iOS upgrade. The design just gets better and better. How convenient. How futuristic. But this guy takes it to a completely new level. I don’t think what he’s doing is standard in iOS!

Simon Pierro is better known as ‘The iPad Magician’ but he is also a pretty handsome German guy with a cool accent and some neat tricks up his sleeve. Yes, he is a magician. He’s a magician using an iPad. So it’s a given that he’s slick with his hands. But Simon has over 80 million hits on YouTube. So he must be doing something right!

Simon’s iPad magic is a whole new take on illusions – combining digital technology in the form of the iPad with centuries old sleight-of-hand and conjurer’s tricks. And he is a master!

Ellen DeGeneres is known for having one of the best chat shows on American TV. She’s a great host and, as well as having the big stars of the day as guests, she also has quirky features and interviews. So, it’s no surprise that she was intrigued by the magician with an iPad and invited him on to her show.

He absolutely blows the minds of everyone in the audience and Ellen in this awesome clip below!

But, he’s no one trick, one show pony. On his YouTube channel he has iPad magic tricks that he’s been pulling off for the last three years. He’s got over 60 videos and each one is a neat mind boggling trick. There are magic tricks with the iPad that you simply won’t believe. There’s the trick where he turns the iPad into an instant tattooing device, one where he entertains cats with an iPad that dispenses milk and has crazy mice running around, and another where he does magic within the Angry Birds App.

More than 60 mind bending iPad magic trick videos to amuse you for hours.

Who Is This Guy?

Obviously, you don’t get to be this good overnight – kinda like the Apple products themselves! This magician and the iPad and iPhone are just getting better and more magical with every year that passes. So who is the iPad Magician?

Simon Pierro is a German magician with heaps of creativity. This Berlin based magician was originally introduced (or inspired perhaps) by an incident in the streets of New York when he was but a lad – 15 years old. Some badass street magician conned him out of $20, and to make up for it…or to make him feel better, his sister gave him a book on card tricks and magic, and his passion for illusion was ignited.

But since these humble beginnings, he has really crafted and evolved his style. He is no cliche magician. This guy is genuinely innovative, and uses his ideas really creatively with new multimedia and technology.

He earnt his spot in the limelight by being invited onto German Network TV show Menschen der Woche (people of the week). Following the success of this, he got a regular slot on the German version of Candid Camera (Verstehen Sie Spaß?) where he has performed as the “magic decoy” in over 20 episodes.

The above information was taken from the wonders of Wikipedia. If you want to find out more on this fabulous European magician, then check out the Wiki page here, or his website here.

And if you’re terribly upset that the above video didn’t show him turning his iPad into a beer pump, then check out this video instead:

The bottom line is that Simon Pierro has created an entirely new sub-set of magic that he is the total master of, with no real rivals. iPad magic merges the Apple technology that we love and blends it with old school analogue skills. It is his domain and he is the king.

Now, I just wonder if we can convince him to turn his magician’s mind to iCloud and see if he can make that easier to use and understand! That would be a special trick!